Members from the Canadian Progress Club visited Red Deer for their Western Regional Convention on June 3rd and 4th, 2016. It was hosted by the Stampede City chapter and held at the Baymont Inn and Suites.

As a newcomer, (joined in December, 2015), this was my first convention and my overall impression was that it was a fantastic event! You could tell the host chapter put in an impressive amount of work and I was grateful to be able to attend as a member of the CPC SILKS.

On Friday evening I attended the hospitality suite hosted by Stampede City. The theme was Psychedelic 60’s featuring All You Need is Love, a tribute band to the Fab Four. The band, which hails from Calgary, put on a great impersonator show and it brought back many happy memories. There was a lot of dancing, drinking and people singing along with the band. Everyone had a wonderful time.

The AGM began Saturday morning with National President, Doug Ritzen, discussing the national year in review and the national convention. There were presentations and discussion about several ongoing initiatives and activities of the Progress Club. Following the AGM, there were Education Seminars dealing with Fundraising presented by Bill Brown and Big Sisters and Big Brothers presented by Rameez Hussani. Both seminars were very informative and I was particularly interested in Mr. Hussani’s perspective as he was once a recipient of their services and now takes an active role as a big brother.

The Awards Dinner was held Saturday evening. It was a delicious meal and awards were handed out for several categories. Congratulations to the winners! The Sergeant of Arms was active issuing fines all day and announced more than $500.00 was raised. The evening ended with a Jimmy Buffet themed hospitality suite.

The Western Convention was a great place to meet members from other chapters and I enjoyed learning about activities throughout our region. To be part of a service club that is dedicated to strengthening local communities through charitable projects and fundraising activities benefiting those in need is truly a humbling experience.

A great time was had by all in Red Deer and I look forward to attending future conventions! 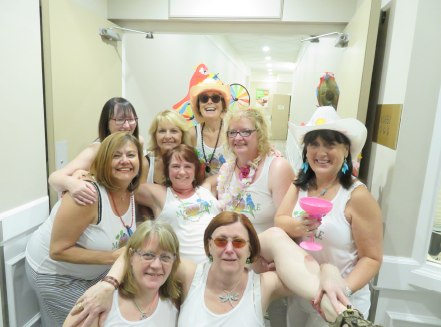